We need a picture of the suspect soarce of the snapping down stairs.

I am going to try to get pictures today...we have some freezing rain coming, so will see how it goes. The snapping sound is coming from inside-I *think* it is coming from a wire and some sockets he replaced, but not positive.

The siding is most likely asbestos...not sure anyone will be willing to touch it, and you really aren't 'suppose' to if not bonded. Though I doubt anyone is going to notice that one corner since most is tore off all ready, long as I don't put it in the trash.

Anyhow, too tired now but will look at links later and try to get those pictures later on today.

He did a wire he wasn't suppose to [he told me he was licensed to and then after said 'don't tell anyone.' Same with a wire down in basement for central unit] and I now hear a loud snapping/popping noise from it every so often...I imagine it was done improperly too.
Click to expand...

The electrical is old I assume. The contractor said he wire he replaced was so brittle it just snapped in half...I didn't see if it really had or not, but I wouldn't be shocked. He replaced it with a wire he said he had at home, bought some new outlets and covers and linked one from the other before putting drywall over it.

I took many pics, wasn't real sure what was wanted...but did manage to get the cellar door pried open for a shot of the fuse box as well.

This is the wire leading from the fuse box to outside I believe...I was told it was stripped, very out of code and not suppose to be laying directly on house [roofers did that, they didn't lay it back on the peg there for it...regardless, still out of code and is suppose to be going up through a pipe] 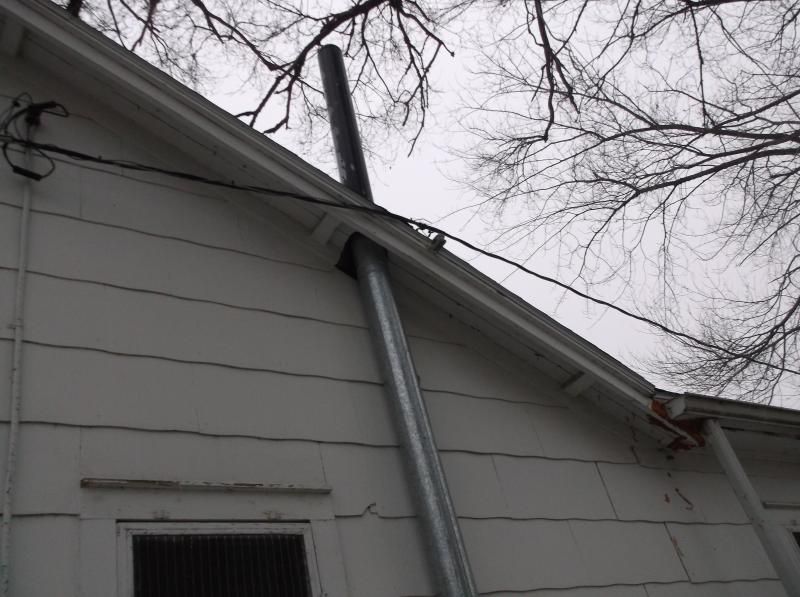 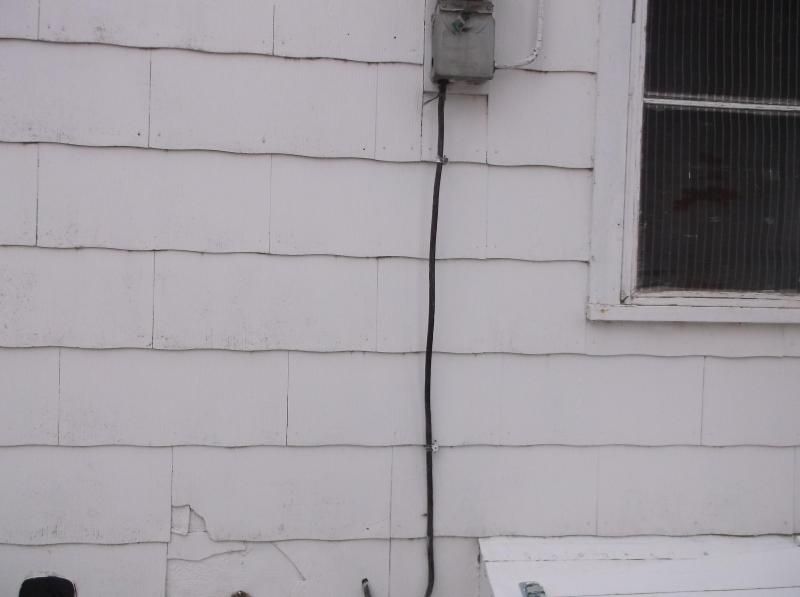 Fuse box, 60 watt I believe...it's a mess, also out of code. Insurance won't cover me until replaced [well probably won't now regardless even if it had been, but I digress]. 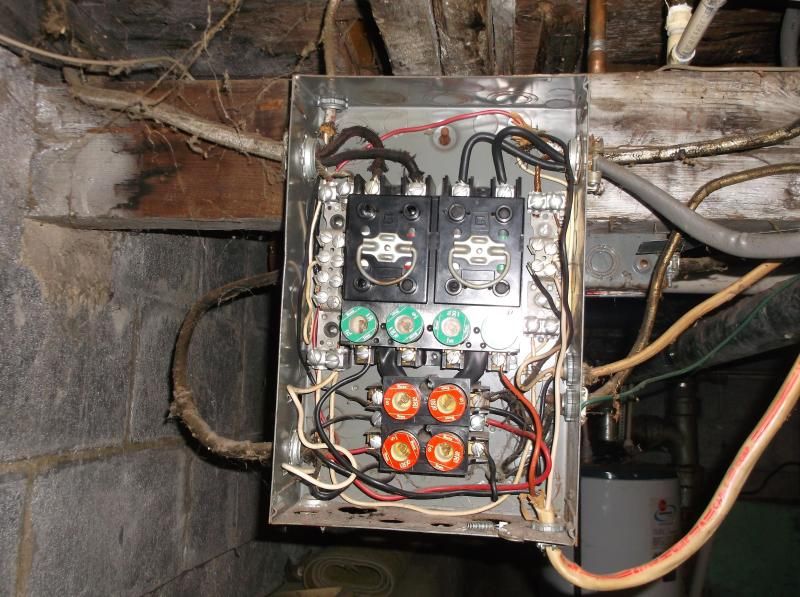 One of the outlets he did. 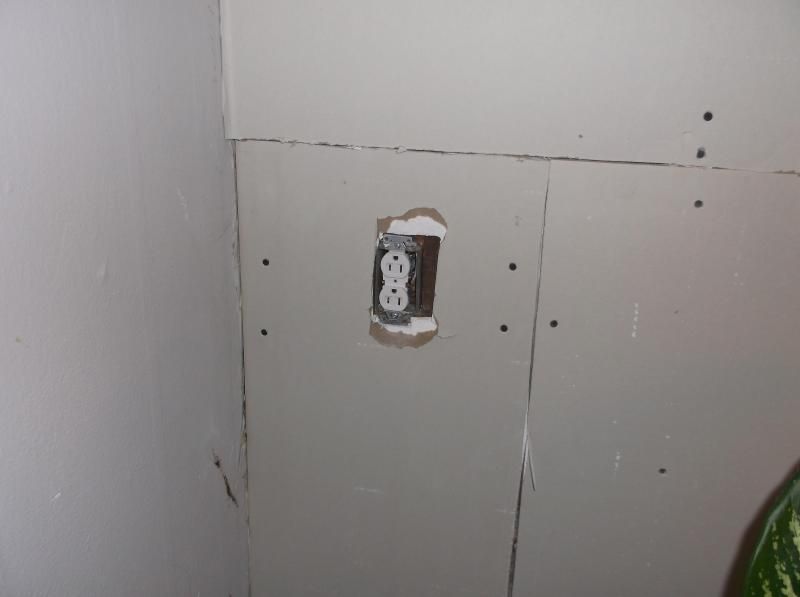 You know, him walking was probably a blessing in disguise...

And just some random pics I took around the house to try to give a closer look of what's going on there.

applebear, I'm down here in southern Mississippi. close to a place called Natchez Ms. you might have heard of it

I have seen interviews on tv, where the person speaking was not shown, if you can use a tape recorder, in your house, by your self, tell your story in your own way, the tech guys can edit pictures of your house with you talking, hell man, they can make you sound like an english earl !!! LOL

from the looks of the work he did. your better off with out him.

There are poeple here that know more about the electrical than I do. Your wiring is old and should be replaced and atleast the main box should have a cover on it and the holes in the bottom should have plugs in them. It appears to have one white wire just hanging there that should be dealt with.

This guy didn't know what he was doing and as Frodo said you are just as well with out him. It would have gone from bad to way worse. We need to get that side of the house covered for the rest of the winter.

I think that if you are too uncomfortable to speak on camera you can just tell the reporter off-camera or write things down and explain your disability and maybe have a proxy to speak for you or they can just report on your story.

I've seen stories like this where they didn't even have the person affected speak at all. They just reported it.

I'm hoping you can get some help with this very soon and I'm sorry that some scumbag took advantage of you.
Last edited: Feb 11, 2015

I know it was probably for the best he walked away, I just wish it didn't leave me in such a bad spot.

I'm going to have to look around and see if I can find help with sealing that side up. My guess is not too many are going to want to due to time of year.

The fusebox has a cover, every time someone messes with it, they keep taking it off. I have 2 fuseboxes, the other is in the shower. I don't know anyone with experience with electrical, so I can't do much more than just put the cover back on.

I could probably do something like that Frodo. I'm waiting on villa to get back to me on what exact details he needs, and see where to go from there.
C

Applebear, Is there a Lowes near you?

I think we have a lowes about an hour and half away.
C

Do you have anyone to give you a hand getting it waterproofed?

Have you talked to anyone on continuing with the project?

At this time, no.

I've talked in great detail about it with my ex therapist...he's tried to get some attention for it, but is unable to get a response from the sources he's trying. He said if we could get the materials, maybe he could find volunteers...but other than that, things have kind of hit a wall.

If you attend a church, men's groups have been known to help folks out who need a hand. Or do you know someone who's active on a local church?

I had a friend ask around her church and said it didn't sound like much could be done, but suggested looking into grants, that maybe the city had something for the fusebox. I couldn't find anything in those regards through our town [we are pretty small].

Call your electric company, they will have access to programs that might be available if anyone does.

Also check in at Town Hall to see if there is local help available. Maybe in the form of grants, or low/no interest loans.

I did call the electric company a good 2-3 years back. I am on a program for low assistance heating and they said I was automatically on the list for the weatherization program, but that it goes by priority to those according to heating bill and I've just never made it high enough on the list to get it.

I am checking more on grants, the only one I could find so far is one through HUD atm. The city has a program for helping with property taxes, but I will ask when I go in if they have anything else in the form of grants...my guess is not likely, but you never know.
C

applebear said:
I don't know if I could handle media attention...I write fairly ok [is how I learned to 'talk'], but when it comes to talking and having a camera pointed on me-not so well, I tend to dissociate under direct stress. I'm just not sure I can handle the humiliation of it all?

I've thought about making a gofundme page, but as I got half way through...it felt tacky asking for myself and there are people in much greater need that deserve help so much more.

If I could get the materials, I had hopes my friend could help me find volunteers to finish up the work...though we did try that route once before [for smaller jobs, before all this happened] and his volunteers left me stranded after buying all the materials with no explanation....that's another story.

The contractor wouldn't talk to me at all. He tried to have his wife collect his tools he left here and told her I would only release them to him...he never came to collect. Instead he blocked me on fb and started liquidating all their belongings and moved out of state. There wasn't a thing I could do, but watch.

Another friend asked a mutual friend we grew up with, to come help me move some stuff to the basement to give me more room [very cramped and I'm basically living in one room with 3 dogs, but they are my family...I don't know what I'd do if they weren't here despite the discomfort] and to ask her church and connections if there were any way to help...she told me there wasn't really anything and suggested looking into grants [which I haven't really found much yet].

Sorry so long, I appreciate you guys listening and not jumping me...took 10 years to take this step, and it was suppose to 'empower' me to feel I could start doing other things. My ex-therapist was wrong. Now I'm chasing bats and mice out of my house, waiting for it to burn down...I've never felt so defeated and afraid.
Click to expand...