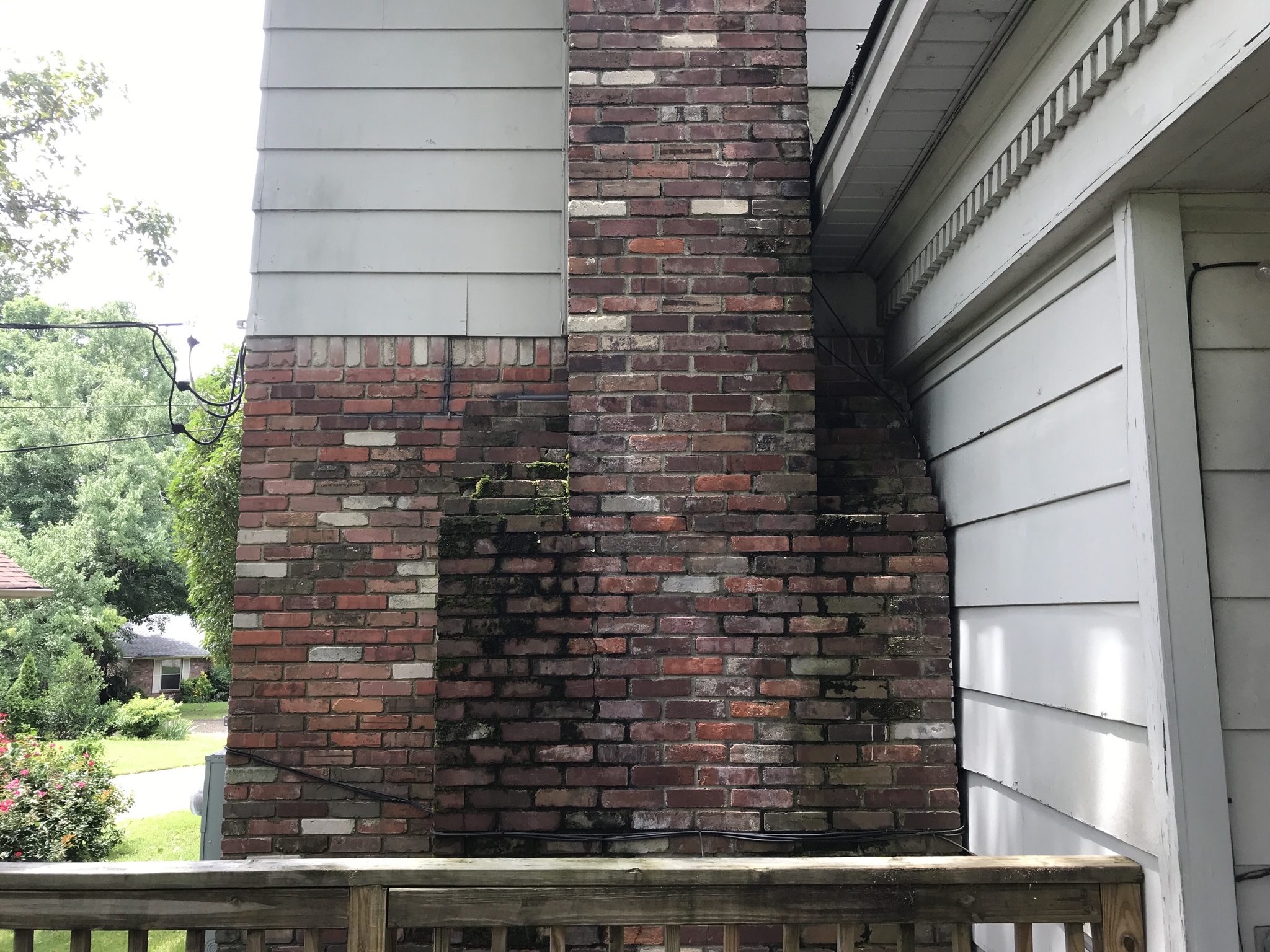 We bought this old (1963) house about 4 years ago to live in and to slowly restore. Right off the bat, the inspector warned us this funky old ugly chimney was detaching from the house and could fall. As band-aid, we had some helical piers shoved under base of the chimney to prevent it from spontaneously tipping over, and had the roof flashing redone around the top.

As we have had some time to really contemplate, we can see numerous issues. It looks like this chimney was added onto the house and not originally built with it. Even weirder, is that it looks like it was added AFTER this adjacent addition that you can see it butting up against. Otherwise, how the hell did they install the siding into that tight space? Shaking my head. (By the way, the interior brick hearth was built OVER THE BASEBOARDS. I'm sensing a pattern with this builder)

The bricks are deteriorating, and covered in moss. There are places in between the addition and the chimney that look like the trap moisture. At some point the owner tried to seal up some of the cracking with copious amounts of caulking or sealant or something.

We have never used it for burning wood or gas (we are using a "vent-free" system for supplemental warmth) , but recently we had a chimney sweep come inspect it and he told us it was in bad shape. Basically said it was a open cavity into our house for water, air, and pests. Advised me to seal the ash cleanout, which I did using liquid nails and a stainless steel plate. He suggested we use hi-temp mortor to seal cracks in the hearth cavity (don't know the correct term).

He also told us to call a mason, which I will do, but first I wanted to post this here to get some feedback about what I should expect.

I'm already assuming there is no hope in keeping this thing. The only value, I think, it offers us is that buyers like seeing chimneys. (I do!) But, this particular chimney seems like it's more trouble than it's worth. Should I just have it demo'd and the wall repaired? Is there any value in trying to save it? Is that even possible?
Last edited: Jun 25, 2019

First welcome to the forum.


I’m not a contractor and normally I go overboard trying to save such a feature. In your case I think I would get it taken down and if you like the look of the fireplace in that location inside then go with a gas unit that is safe. You are never going to burn a wood fire in it and feel safe and in that type of fireplace more heat would go up the chimney than the fire would provide.


We would have to see more of how it is connected into the main house maybe that brickwork could stay and just the bump out chimney removed.


I would have whoever does it understand you want it taken down methodically starting at the top and working down, saving as many bricks as I could depending on the type brick.


Get that big part down and maybe there is a chance to use the used brick to patch in the opening.


Just my ideas to get the conversation started. Others will be along.
B

it looks to me like the cause of the problem is the water run off from the roof to the right hand side of the picture. i would remove chimney then install gutter before rebuilding the chimney .
J

billshack said:
it looks to me like the cause of the problem is the water run off from the roof to the right hand side of the picture. i would remove chimney then install gutter before rebuilding the chimney .
Click to expand...