Help with hanging a 2000# load from ceiling joist

Hey guys, i have an aerial yoga system im installing for my daughter in our workout room. It is a 2 point hook system that is approximately 60 inches apart. The instructions call for a 2000-2500# safety load rating. thats about a 16X safety rating. Which would be 1000lb rating per connection

My house is as a 1960's 1 story, ill be locating this a few feet from the center of the room(away from centered ceiling fan). Ceiling is skimpy 2"X6" joist on 16" spans. It also has a two piece 2X6 joined as an L ceiling fan brace that goes across and tied to the wall joist.

My initial idea was to take a 8X8 (or 6X6) and span it across 8 of the 2X6 joist. Then using timber post connector made from galv steel, mount a perpendicular 8X8 down to the drywall, then attach the anchor(see in green). This would be 250# per joist. Actual dead weight of 180lbs max(me) would be 22.5 lb per joist.

Alternatively...i could rotate the mounts 180 degrees and then place two 8X8's across 8 joist and only one connection per 8X8. 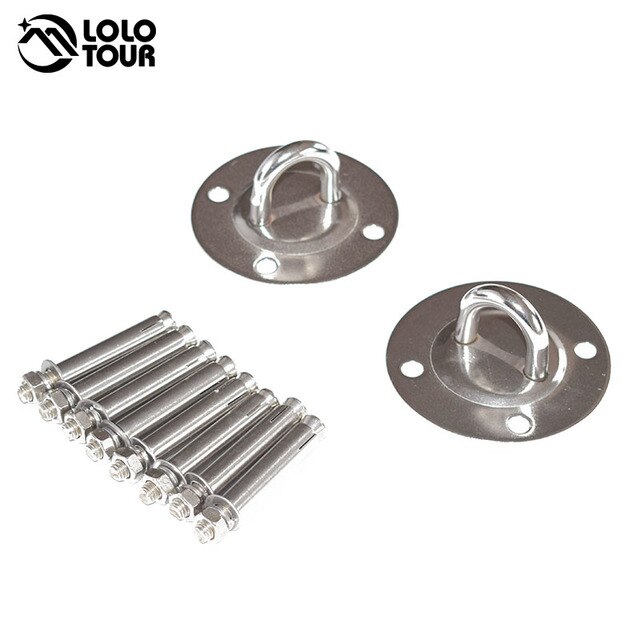 The ceiling joists are at their span limit and the expansion anchors pictured are for concrete, not wood.

The 6x6 or 8x8, when used to bridge and support a framing element, are generally referred to as strong-backs or stiff-backs.

Snoonyb: correct! i had planned to replace with wood anchors or a allthread with backing nuts.
regarding your design idea, can you clarify a couple points please? (or is the picture below what you had in mind?)
1.) I understand what blocking is, but what is the "4X" mean. is this 4 blocks side by side or spaced out horizontally or stacked?(or is that 4 blocks per connection like the below picture)
2.) With 2"x6" which is actually 1.5"X 5.5", what did you have in mind to get from the top of the drywall to the strong back. If i used a 4"X4" to block down by the drywall, then that leaves 1.5" to shim to the strong back.
thanks!

I would use a 4x6, in the side view, and just at the anchor points, because it will closely match the height of the 2x6 CJ's, and 6x6 are a little costly.
C

Makes sense...so just a single 4x6 and mount it one anchor in the middle. On the timing to the rafters, I assume at least two? One would be at an angle back to the roof incline and the other straight up since that side opens up to the rest of the house ? On the 6x6 strongback is there a proper amount of 2x6 joist I should span it across or all the way to the wall plates? And also what is MST? Thanks!!
S

You block and set over the wall plates of the interior walls and you may have to strap over the low section of the roof, to the rafters, if you cannot block at the eaves.

Here is a link to a variety of framing connectors; https://www.strongtie.com/straights...p/hrs.st.hst.htp.lsta.lsti.mst.msta.mstc.msti
S

You can mill a block from the 4x6 that follows the roof pitch, and rests on the wall top plate, for the eave end of the strong-back.
C

Ah i didnt realize they were called MST..thats what i planned on using. For the strong back, for cost savings, would you do this standard design over a 170" 6X6 timber? thanks! i owe you a beer

and hows this look so far.

I would use a min. a 4x6 as a strong-back, because I over build everything and am paranoid about causing a failure to someone else's property.