Mine as attachment below, humble one!

We don't have the nicest Appliances, but I love our kitchen!!

Moving into this house, after we do renovating. Got a great idea to make this kitchen work better, will post once we finish.

This forum is awesome. I'll show our kitchen too. The ideas here are great and could really help some of the other designers here.
(commercial link deleted)
Last edited by a moderator: Aug 2, 2018

We completed our new kitchen about a year ago. Was a major undertaken but sure came out nice and the best thing is the wife is super joyed :banana:
This kitchen is higher end assemble yourself which I tweeked as I was assembling them for long life.It's Spiced Maple shaker with Granit looking Laminte tops, brick stile tile backsplashes. The Island top is Plyboo which is Laminated Bamboo plywood stained and polyurethaned. The mantle area above the Hood Fan was custom made by myself as well as the feet under the Island.
The sink area is new, the wall used to be where the arch is and we bumped it out 28" x 10' since the soffit overhang was 4' this seemed logical and we are very happy we did this also behind the stove is a 5x7 walk in pantry. We are overjoyed and really enjoying the new Kitchen.

And here are the only 2 pics of the old Kitchen I can find. We are not the people in the pics but they are family Okay that didn't work
Okay lets try this again

Built this house in 1987 and have added a 400 sq. ft sun room addition few years back as grand kids came along.

Management says it is time for a little updating of kitchen.

Management removed dark green wall paper. What a difference in light in kitchen. That was a very BIG job for sure.

Had several base cabinets needing repair. Since countertops were to be replaced now was the time to pull them and replace particle board with real wood.

I will be doing a kitchen Reno next year.

Will be good to see some pics, recommendation and approximate prices.
I

Redoing everything from cabinets to new chimney installation, will post something for sure when done with it!

I have a fairly ugly kitchen. Back in the 80s, my father and a now late friend built custom cabinets out of oak. I need to get more pictures, but the kitchen is a mess.

I don't have before pics, but when we first moved in, the stove was against the same wall as the sink, there were no cabinets on the left wall-- but there was a wood stove for heating. My father and friend built the bookcase under the load-bearing beam and there are upper cabinets above all of the cabinets. The stove is now against an oak mini-wall on the peninsula (and the upper cabinets are double-sided). The angled cabinet on the upper right has turntable shelves. I was too lazy to draw the chairs in.

The potato bin was custom made by our late friend and is also made of oak. There is a pot rack collecting dust above it. The microwave sits where the original refrigerator was, but for some reason my mother didn't want it there. We have an upright freezer. We have two fridges because we never took out the old one when we moved in the new one and we use both (my brother pretty much has one fridge all to himself bc he eats more than everyone else & when we shared a fridge, he would steal my food and milk).

The curtain over the sink has since been ruined because my brother knocked over a bucket of paint, knocking the lid off and it sprayed everywhere and he just left it without cleaning it and I discovered the mess about 20 minutes later.

The original parquet floor was ruined by water damage and the paint.

Here is a rough sketch of the layout of my kitchen. It is not to scale and I probably messed up the proportions quite a bit. All of the gray objects are not built-in and can be moved. It's an awkward layout. I was too lazy to draw in chairs and small appliances as well as scratching posts, pet food dishes, trash cans, etc.

The color in the first few photos is washed out. Poor quality photo of the cabinet and trim over the window above the sink:

Cabinets and above range vent

Here is another shot of the cabinets with more reddish tint-- the real color is somewhere in between the faded ones and this color. 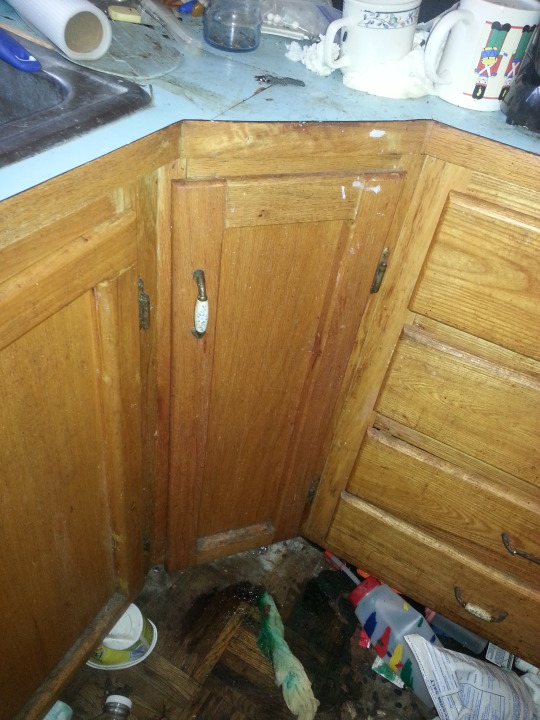 And the new microwave It's our 3rd microwave. The first was a Montgomery Ward 3.0cu ft induction microwave that lasted 22 years. The 2nd one lasted not quite 10 years.

Back in the 80s my father bought 1,000 board feet of oak lumber and he used some of it to make cabinets. These are pictures from several years ago, the layout has changed a bit. The refrigerator here is now next to the shelves and there is another fridge in it's place. We took the middle leaf out of the table and moved it to the right.

In the hallway behind you can see the lacquer and mother-of-pearl panels from Vietnam. The leaf painting is something I made in high school. The piece of furniture to the left of the painting is an old record player / entertainment center that a friend gave us.
View from the front room doorway: 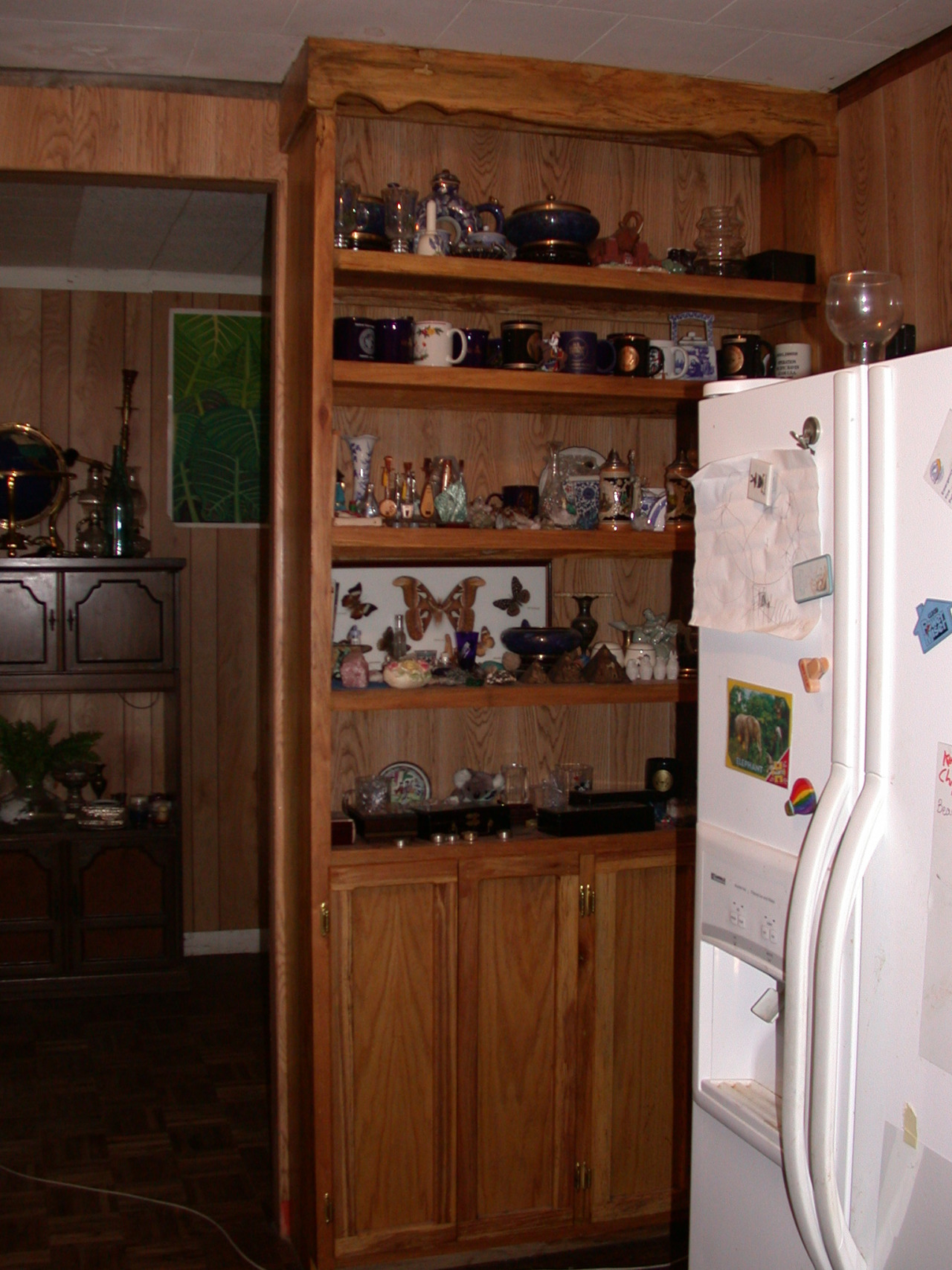 View from over near the kitchen sink: View from the hallway that leads to the laundry room-- you can see the living room on the other side. You cant really see it, but on the underside of the upper cabinets over the peninsula, there are little racks that fold downward to hold spices or cookbooks or whatever. There are two (one on each side of the stove). Here is a view from the hallway that had the lacquer panels: