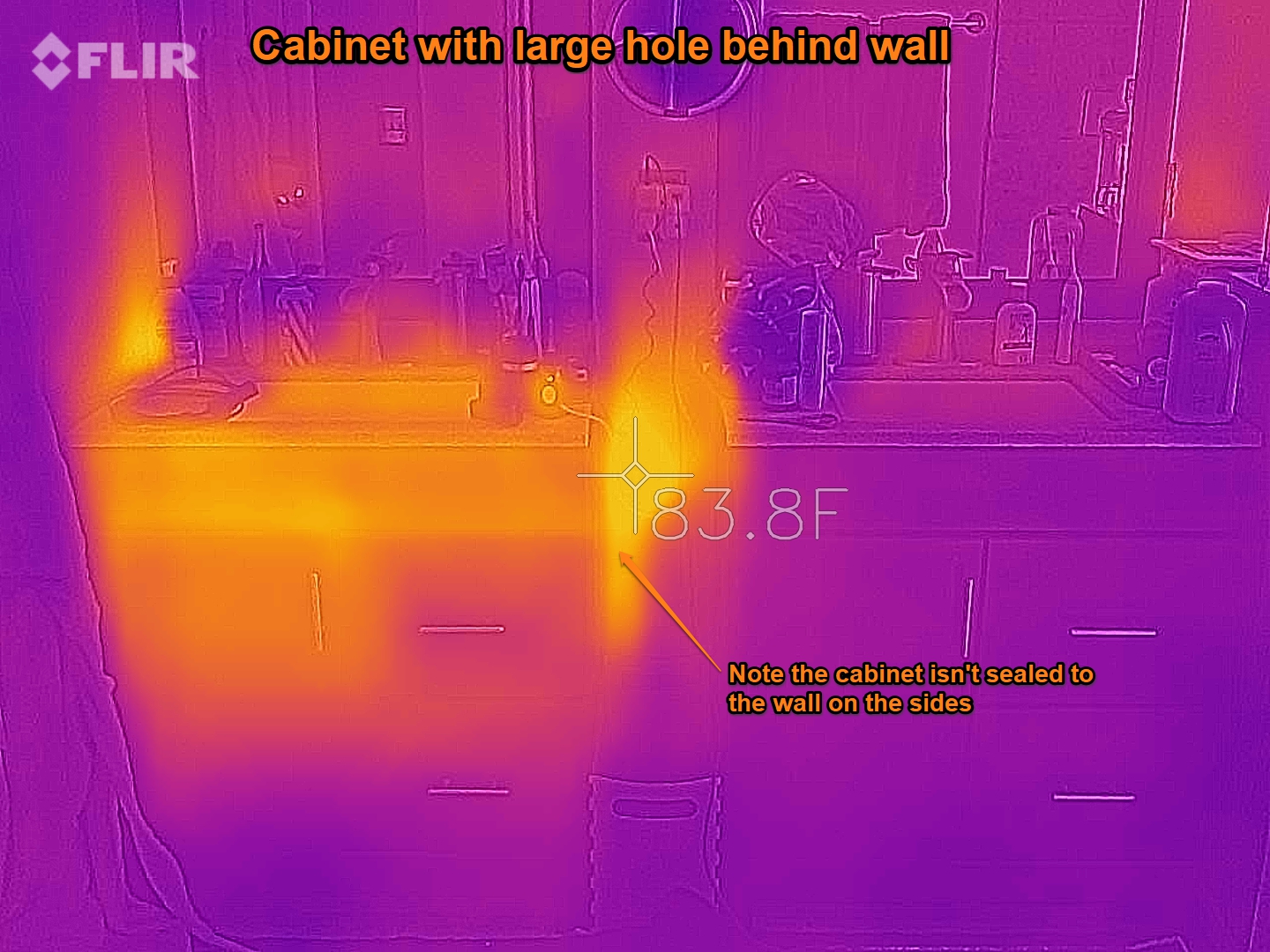 I bought this home almost two years ago. And this year I suddenly had an influx of heat in my 2nd story bathroom. Lots of warm air was being dumped into the room from behind one of my bathroom cabinets. 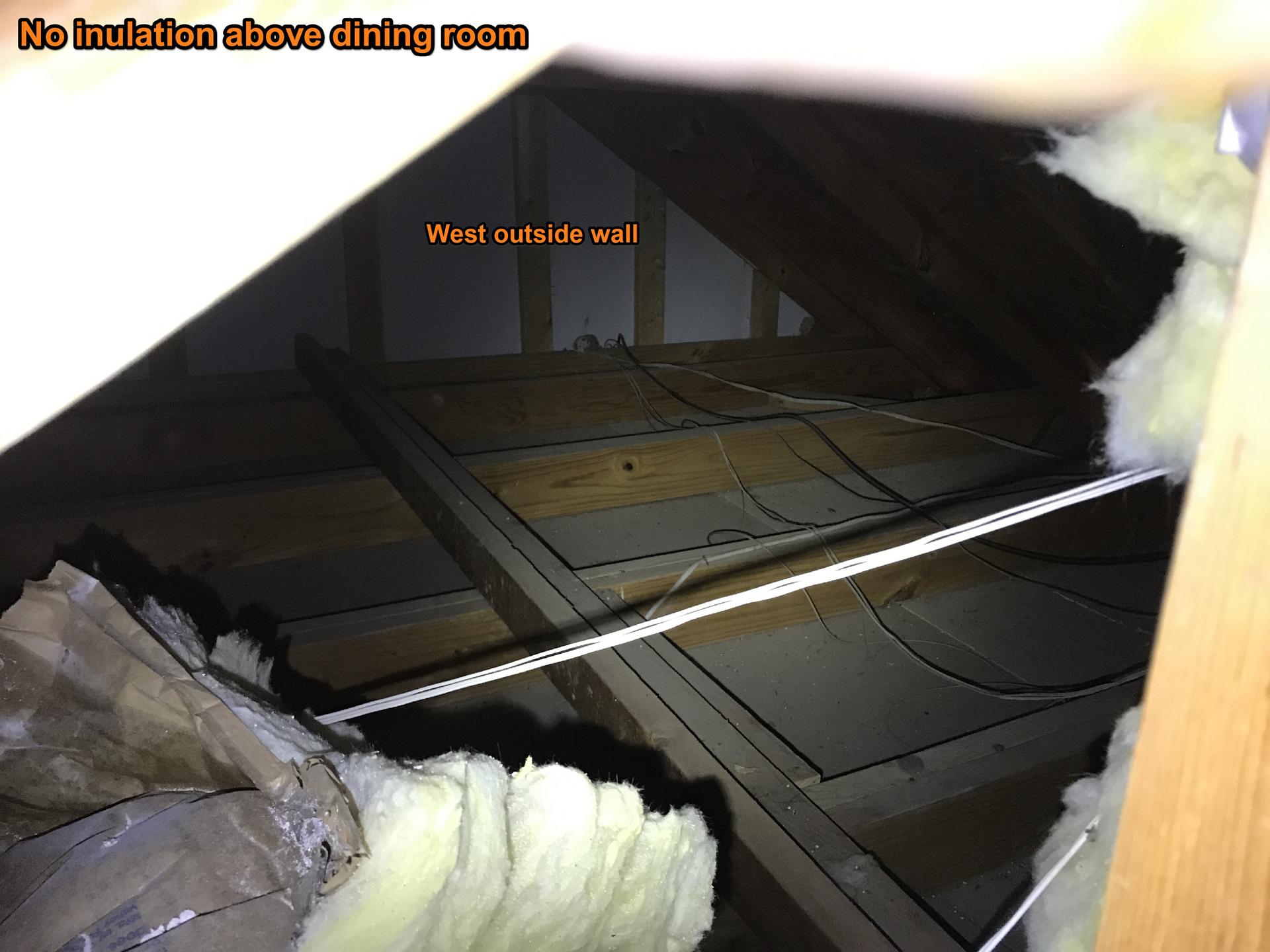 The wall behind the cabinet has plumbing of course, but apparently at some point the loose insulation on this wall fell. I put a camera and light inside, and this revealed that the enclosed attic above the dining room has no insulation. 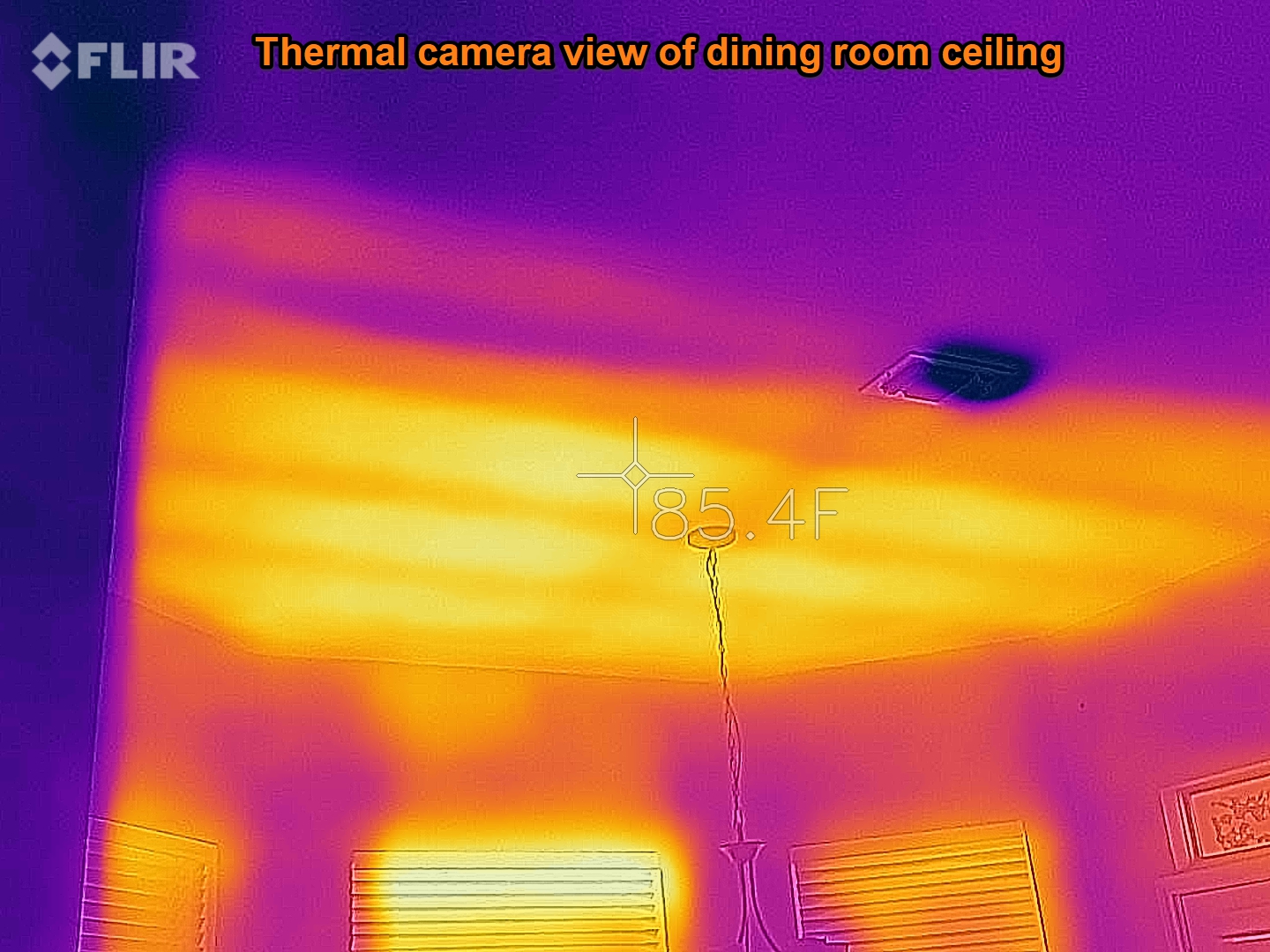 I had done a thermal survey of the house when it was cold, but not yet when it was hot.
The dining room was one area which was hot in the summer, but I had chocked that up to the three western facing windows here. And last year I had put in 60% sun shades on the outside.

Now that I discovered the issue upstairs, I can see that the dining ceiling isn't doing any good. 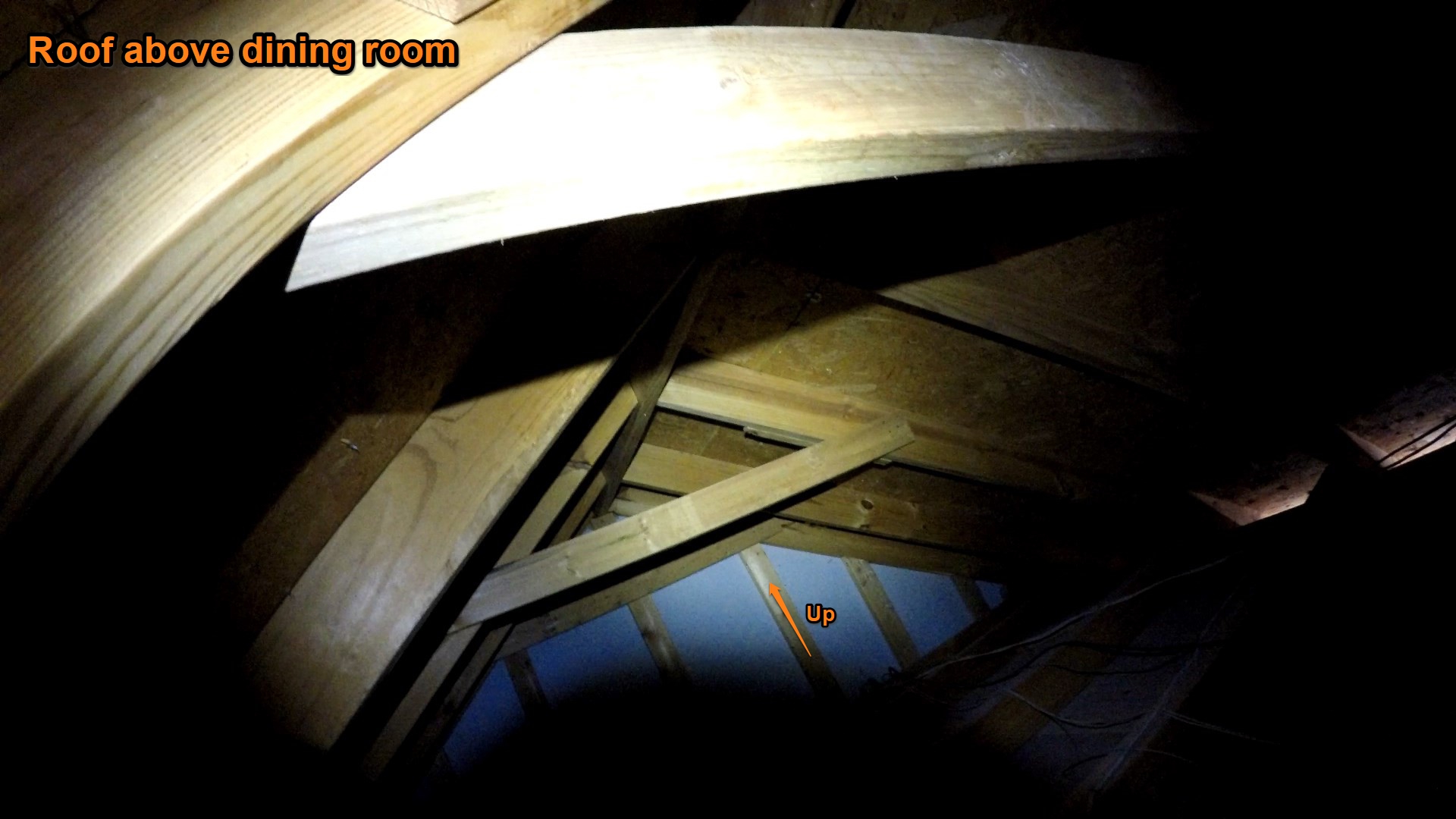 The dining room is an outcropping on the house. It effectively has its own roof. The construction is typical of the area, with composite shingles over plywood. The outside walls in the attic also appear to have no insulation, but the external construction is 4" thick limestone masonry. 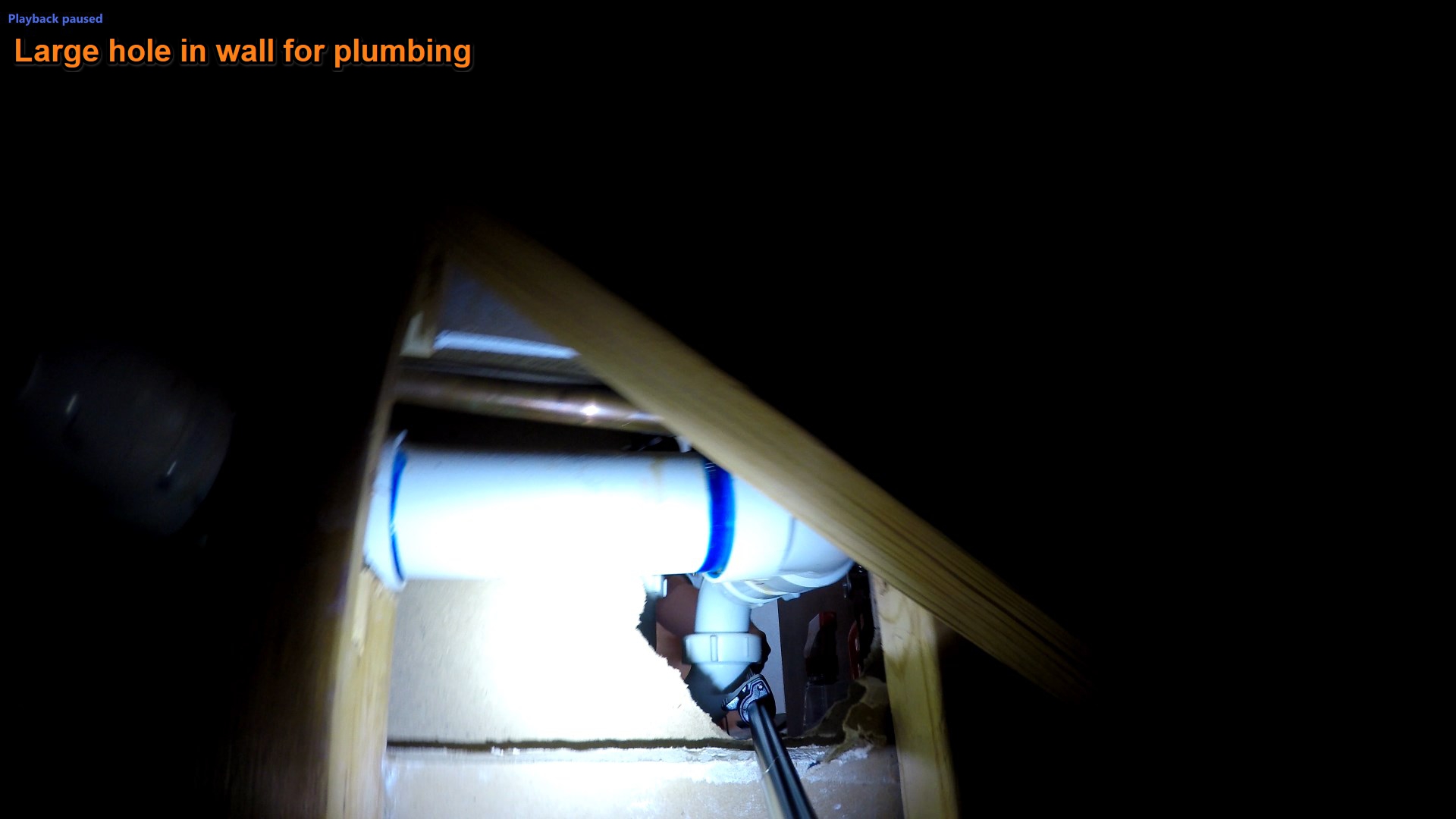 The upstairs bathroom was redone at some point in the past. And they moved at least one of the sinks.
In doing that remodel, they tore a sizable hole in the drywall, and covered it up with the cabinet (which had a slightly smaller hole).

The hole is big enough to put a GoPro on a selfie stick to get these shots. 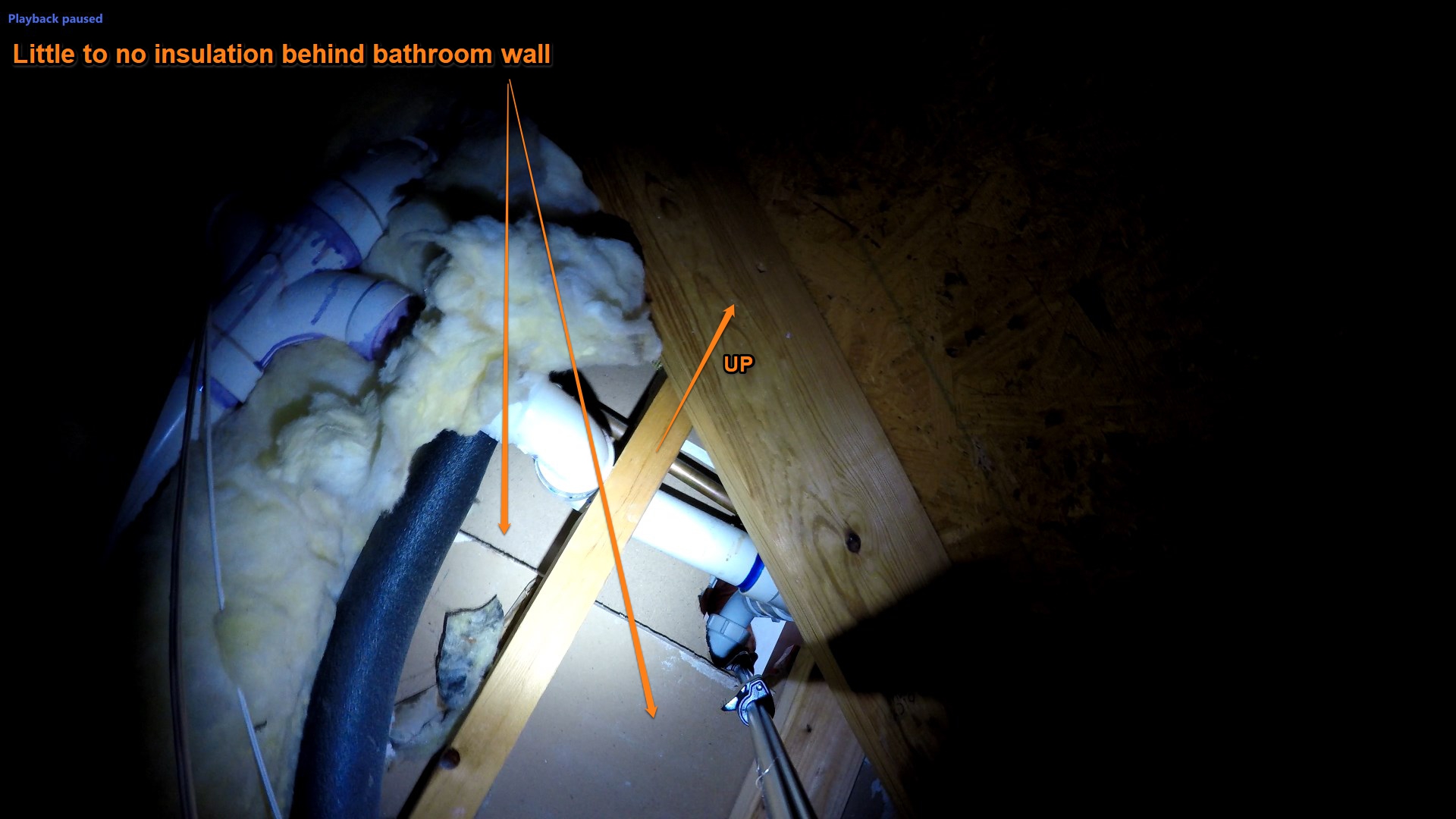 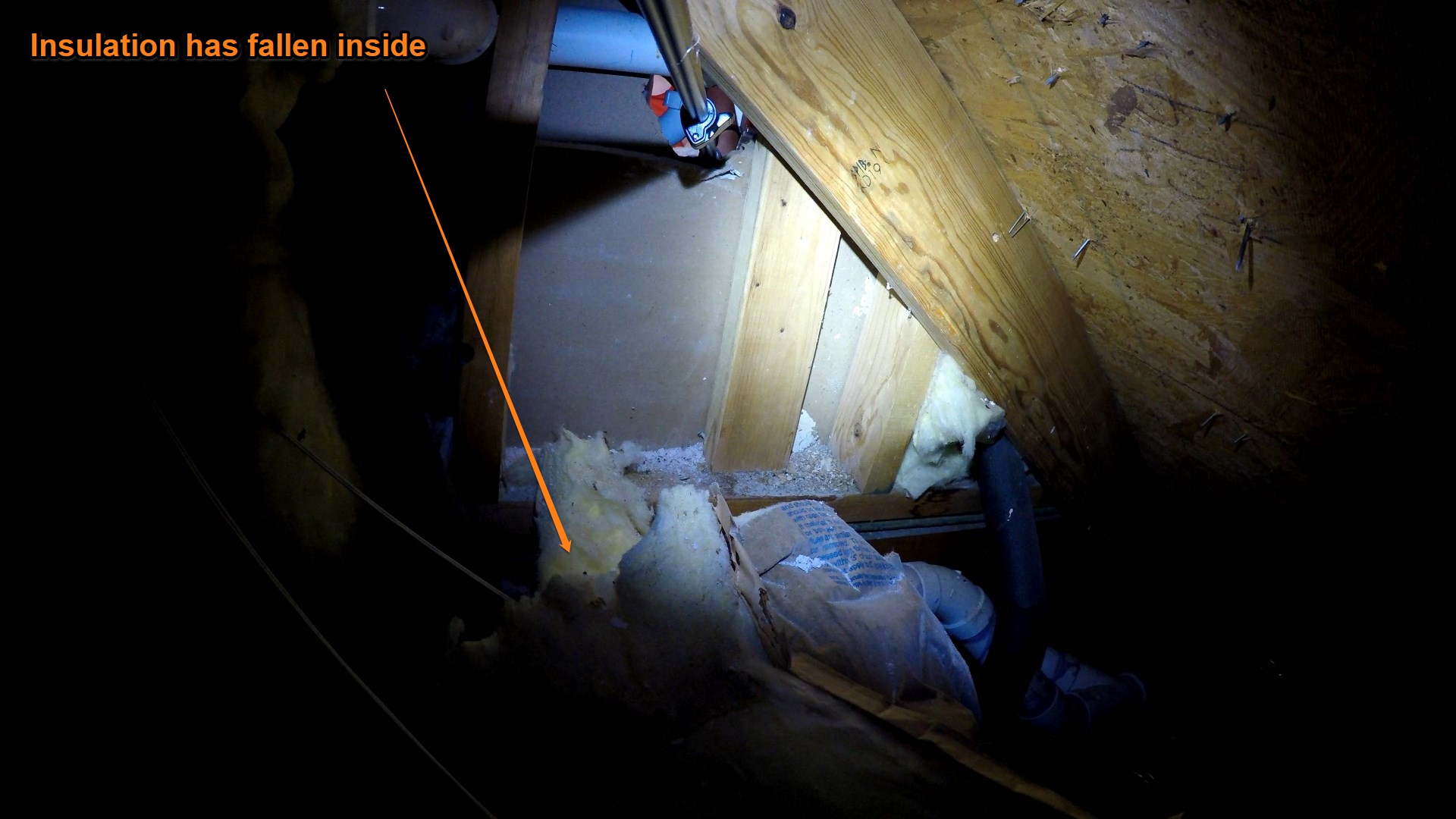 The insulation behind this wall is loose, and has nothing to prevent it from falling. So it was inevitable that this would have occured.

What I need help with is advise on the best way to insulate this near inaccessible attic.

Last year I has blown in insulation added to the entire accessible attic spaces of the home. It seems possible that they could remove the loose bathroom cabinet, and gain enough access on the 2nd story to blow in insulation into this space. But coverage without better access seems like it might be spotty, or clog the vents.

For the attic blown-in, cellulose or fiberglass would be a good option. You don't need a large access hole to do it. For the walls, what is the exterior covered with? If siding, your best bet to blow insulation in from the outside. This is a professional job. They have the tools and the know-how to do it quickly without tearing up your house. With vinyl or aluminum siding they unsnap a section to expose the sheathing and drill a 2" or so size hole in the sheathing at the top and bottom of each stud bay and blow in cellulose (ground up newspapers treated to prevent pests from nesting in it) I think they can also do it with spray foam. For wood siding, they pretty much do a use a hole saw and cut through the siding and then patch and paint to match.
H

I have a professional coming to give me a quote this week. I just like to have as much input as possible on my options.

The outside wall is 4" limestone masonry, so no outside access. At this point I think removing some drywall above the dining room is my best bet. I don't want them to just blow in insulation without being able to do a complete job including installing the eave vent ducts. And this small attic completely lacks a roof vent. I also want them to install a backer onto the dining room wall to hold in the insulation.

With a masonry exterior, you can do blown insulation from the inside of the walls. Same process, it is just a little less messy to do it from outside.

@nealtw That is a good idea, I will discuss it with my pro.

How old is your house? I would have thought in Austin Texas this would have never passed inspection with little or no insulation.
H

1999. This issue should not have passed an inspection.

One issue might be that apparently they only require three inspections in Hays County (Near, not in Austin): 1) A foundation inspection. 2) A framing inspection after plumbing and electrical 3)A final inspection after drywall is up.

That means the builder can skip insulation on areas like this, and there is no real way the inspector can even see this closed space, unless they jammed a camera through the insulation behind the hole in the bathroom wall or used a thermal camera. Considering how spotty my attic insulation was before I added more, I expect the original insulation contractor was crap/cheap to begin with.
S

No access to attic is not a good situation. An attic hatch is not major surgery. Just find a good place to put it. A lot of times they put it in a closet because its hidden there. Trouble is, you probably have to empty your closet before getting up there. An upper shelf in the closet can be a real pain to get over/around. Maybe you can find a better spot. For various reasons, I have found it necessary to get in my attic at least a dozen times since I bought my place twenty years ago.
H

I don't want an access door, so I will have them patch up the ceiling and blend the cutout once done. This is my only option to get it done right that I can think of, unless the attic vent they install ends up using a hole big enough for a man to fit through.
H

So I guess I was blind, because I didn't walk out far enough to notice that the outside triangle wall was hardie board siding and not stone. My pro came over, and he says the best solution is to install an gable vent. One with a large enough cutout for a man to fit through. Then it is just a matter of putting up a barrier on the back of the bath, installing baffles, insulating, putting up radiant and then installing the vent.
You must log in or register to reply here.
Share:
Facebook Twitter Reddit Pinterest Tumblr WhatsApp Email Link